How to make a chocolate shell for your giant cupcake 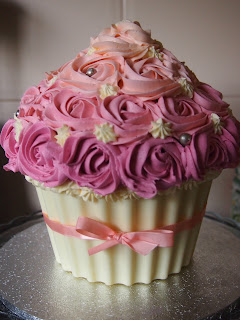 A popular cake at the moment is the giant cupcake. Several companies make the pans for this cake, I have seen Wilton, Ecko, Bakers Secret, Fox Run and a silicone moulds available in shops. I have been walking past this tin in the shops for some months now and finally gave in a bought a Wilton giant cupcake tin in early September. Eager to try out my new purchase I volunteered to make my sister-in-laws birthday cake (she turned 21 again this year, lucky girl!).

A favourite cake combination of mine is chocolate and peppermint. So what better way to suprise people then to cut through a white chocolate shell to find chocolate cake and then to take a bite and discover that your pink roses are peppermint flavoured. Delicious.

To start off with I'll give you a quick rundown of baking the actual cake before we start with the chocolate shell.

The above photo is the first giant cupcake cake I've made, so its not a difficult thing to do. Don't be scared off by shaped cake tins they are just as easy to use as a regular square or round tin. Most shaped tins have a non stick coating so you don't even need fancy cake releases. I started off with my Wilton pan. 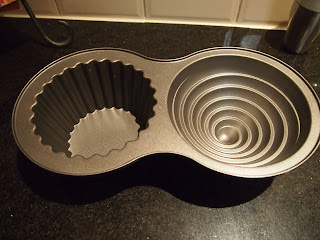 For my cake batter I used Rosie from Sweetapolita's recipe for Winter Delight Peppermint Cake, the recipe is said to make up an 8 inch 3 layer dome cake. I made up the batter as per the recipe and filled my cake tin up until an inch from the top and still made 4 regular cupcakes with the left over cake batter. Cooking time will vary, I set the oven to 160 degrees fan forced and baked on the middle rack. Initially I set the oven timer for 40 minutes and then kept an eye on the cake from then. In my oven I left the cake in for approximately 55 minutes but this will depend on the type of cake you choose to cook and your oven. Try to avoid opening the oven door during the first 30 minutes of baking. The  cakes are done when a toothpick or skewer comes out almost clean, do try not to over-bake. 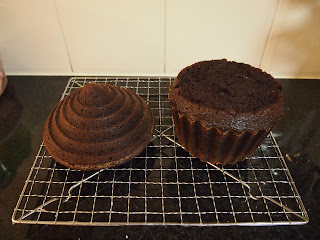 When the cake is cooked remove it from the oven and allow to cool in the tin for 15 minutes before turning out on to a wire rack. As you can see from the above picture after the cake was cooled I trimmed some of the excess off the top of the cake as it had risen quite a lot during baking.

The next step is to start on the chocolate shell!

I don want to tell you how to 'suck eggs' but do ensure that the tin is clean and 100% dry before you start the shell.

Ok, take approximately 400g of chocolate buttons or coarsely chop chocolate in to pieces. And place in a microwave proof bowl ready to melt the chocolate. 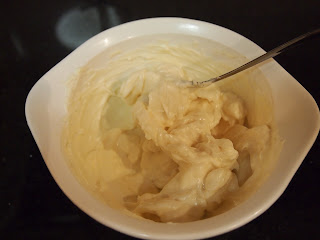 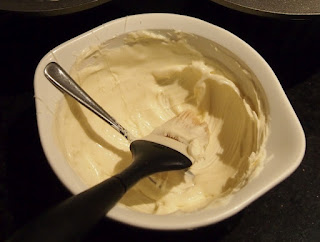 And now we are ready. (If you want to colour your chocolate now is the time to do it, make sure your food colour is oil based.) Take a pastry brush and begin to brush the melted chocolate over the pan, pushing out any air bubbles with the pastry brush as you go and smoothing out any lumps. Once you have a good first coat down leave the tin aside and allow to set for 10 minutes. 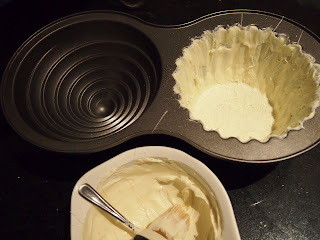 Come back to the tin and remelt your chocolate so it is smooth again. Go over the tin now giving it a second coat ensuring that all areas are covered. Now place the tin in the refrigerator and leave until chocolate is completely firm, (I left mine for about half an hour). 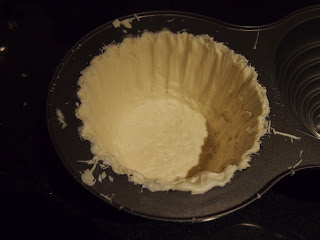 To un-mold the  chocolate shell I carefully picked off the excess chocolate around the top of the shell and this released the shell, (it literally 'pops' away from the edges, trust me!). 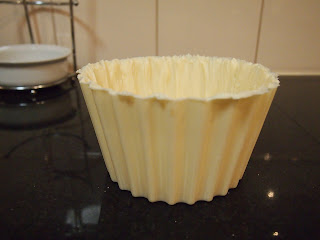 I then turned the shell out and placed it on the bench and continued to break off any rough edges from the top of the shell. 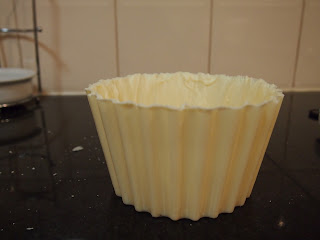 Now is time to quickly go over how I prepared the cake for those that are interested. My cake had been sitting in the fridge chilling for the last hour. I find that chilling the cake makes it easier to trim. Previously the base of the cake was fluted like the shell. Now to fit the cake in the shell I needed to trim it, so off came the sides of the cake. Do ensure that the cake fits in the chocolate shell and you will also need to trim some off the top of the cake so that it is almost level with the chocolate shell, I forgot to do this and had to do it after I had iced the bottom half. 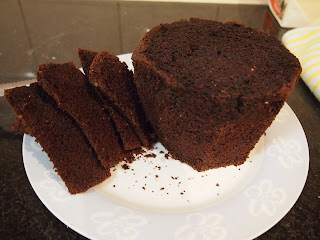 Next I mixed up my buttercream icing. I remelted my left over chocolate and used a small amount to stick the chocolate shell to my cake board. I then split the base of the cake horizontally and filled the centre with buttercream. Placed the cake back together and roughly coated the bottom half of the cake with buttercream. I then placed the iced cake in the fridge for 15 minutes to allow the icing to firm up. 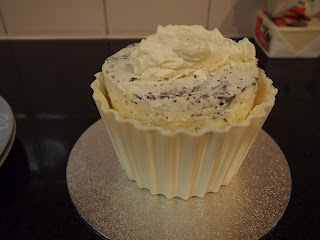 After removing the cake from the fridge I then gently dropped the cake into the chocolate shell. (I then trimmed the top at this point as I had forgotten to do that earlier. Oh well, more left over iced cake  for me to eat.) I then put a thick layer of buttercream on top of the bottom half of the cake. 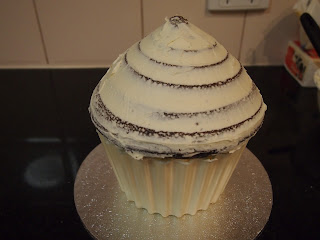 Now that the cake has been assembled and covered in buttercream it is ready to be frosted and decorated anyway you like. I've only made the one so far but will update the post with different photos as I make some more and experiment a bit.

If you give this chocolate shell a go or if you have photos of giant cupcakes that you have made I would love to see them! 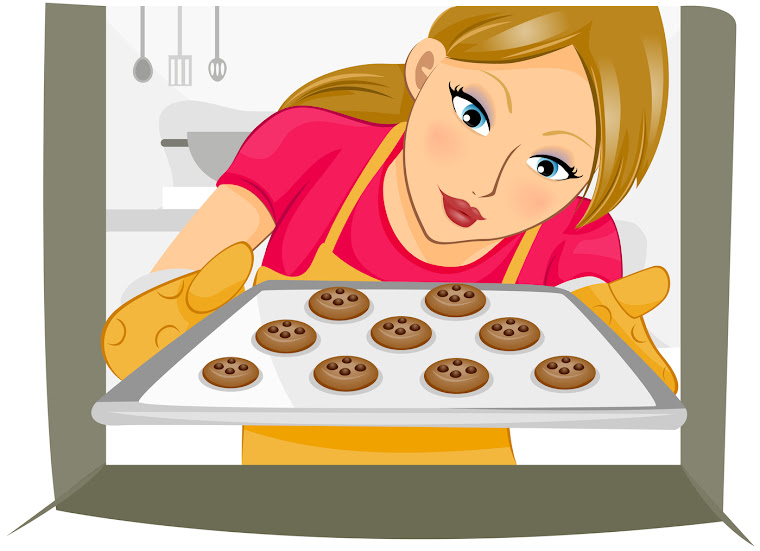